When things get stuck, and progress isn’t being made, mobilizing communities to bring about change can feel impossible. But, the fact is that current realities aren’t set in stone. They can – and DO – change over time.

Consider a woman’s right to vote. It’s something most of us take for granted. But, it was a long road before it was a realty.

The women’s suffrage movement began in 1848 when a women’s rights convention was held in Seneca Falls, New York. This meeting was not the first in support of women’s rights, but suffragists later viewed it as the meeting that launched the movement.

In 1902, the newly established Australian Parliament passed the Commonwealth Franchise Act 1902, which made Australia the first country in the world to give women the right to vote at federal elections and to stand for Parliament.

Most major Western powers extended voting rights to women between the two World Wars, including Canada (1917), Britain and Germany (1918), Austria, and the Netherlands (1919)

Finally, in 1920, the 19th Amendment to the U.S. Constitution granted American women the right to vote.

So, while it’s easy to assume that human history is static – and things simply can’t change – hardworking and organized community members and activists have shown us that change happens when the right people put their shoulders to the right wheel at the right time and apply the right amount of pressure.

The same goes for leaders of volunteers, as they work to build a greater understanding of the needs and immense power of volunteerism.

Change can happen, but it takes real, sustained organization to win.

The ability to successfully mobilize communities to support change has traditionally rested on three main goals for community organizers. They focus not only on moving the issue forward, but also on developing the potential of each individual and the organization as a whole.

Although ultimate goals may not be reached for years or even decades, organizers focus their energies on winning concrete improvements in the here and now. Winning smaller class sizes in schools, forcing municipalities to make space for affordable housing, or requiring utilities to pay homeowners for solar energy are significant wins that play a part in larger issues of equity.

Giving people a sense of their own power by promoting self-confidence of the organization and its individual members.

People themselves are engaged and involved in winning the issue. When an advocate speaks for a community, or a lawyer launches a lawsuit, communities may sense the power of the advocate or the lawyer, but do not experience their own sense of power. Why does it matter? Because people who develop a sense of their organized power are more likely to stay active and take on larger issues.

Altering the relations of power by building strong, lasting organizations, by changing laws and regulations, and by electing people to office who will support the issue or change.

In the end, community mobilization should also change the power dynamics at work. This requires building strong, sustainable organizations that those who hold the power of government must always consider. In community organizing, both current and future realities are always part of the equation. In other words, building an organization is always as important as winning a particular issue.

Volunteer involvement, on the other hand, is more focused on engaging community talent to serve the mission of the organization. As a human resource strategy, it also has the added benefit of improving the connections between organizations and communities and, sometimes, those they serve.

In addition, policymakers – legislators, government agencies, planners, and, funders – attempt to solve community problems by devising and implementing policies intended to have certain results. For example, these may take the form of laws, regulations, incentives, media campaigns, programs or services, and information.

In some cases, well-intentioned planning has led to negative consequences. In many cases, social initiatives work better, and generate better policy, when those directly impacted are involved in developing them. This is where advocacy comes in, which can be spearheaded by either volunteer organizations or community organizing groups.

In the end, each organization must decide its own relationship with the traditional power structures and how it intends to make a change for the better. The options are numerous. Each approach might involve mobilizing communities and can all work together to create a groundswell movement with powerful breadth and depth.

While volunteer administrators can learn from community organizers – and vice versa – traditionally speaking, they are not the same thing. Volunteer involvement is not the same thing as direct action organizing. However, both may involve mobilizing communities for a specific purpose.

In general, these are the operational and philosophical differences between how citizens are engaged, what power is afforded those engaged, and (as discussed in the previous section) the ultimate goals of engagement.

Community organizing can be assumed as a tactic of a volunteer-involving organization for purposes of moving an advocacy agenda forward (along with inherent challenges to funding and potential conflicts of interest). Volunteer (or citizen) mobilization is a necessary element of any successful community organizing endeavor, as volunteers help build the organization’s strength and power.

In addition to the broad differences discussed, each individual organization varies on how they involve volunteers or community members and on what activities they focus their energies.

Below are some of the similarities and differences between traditional volunteerism and community organizing as they mobilize communities for the greater good. 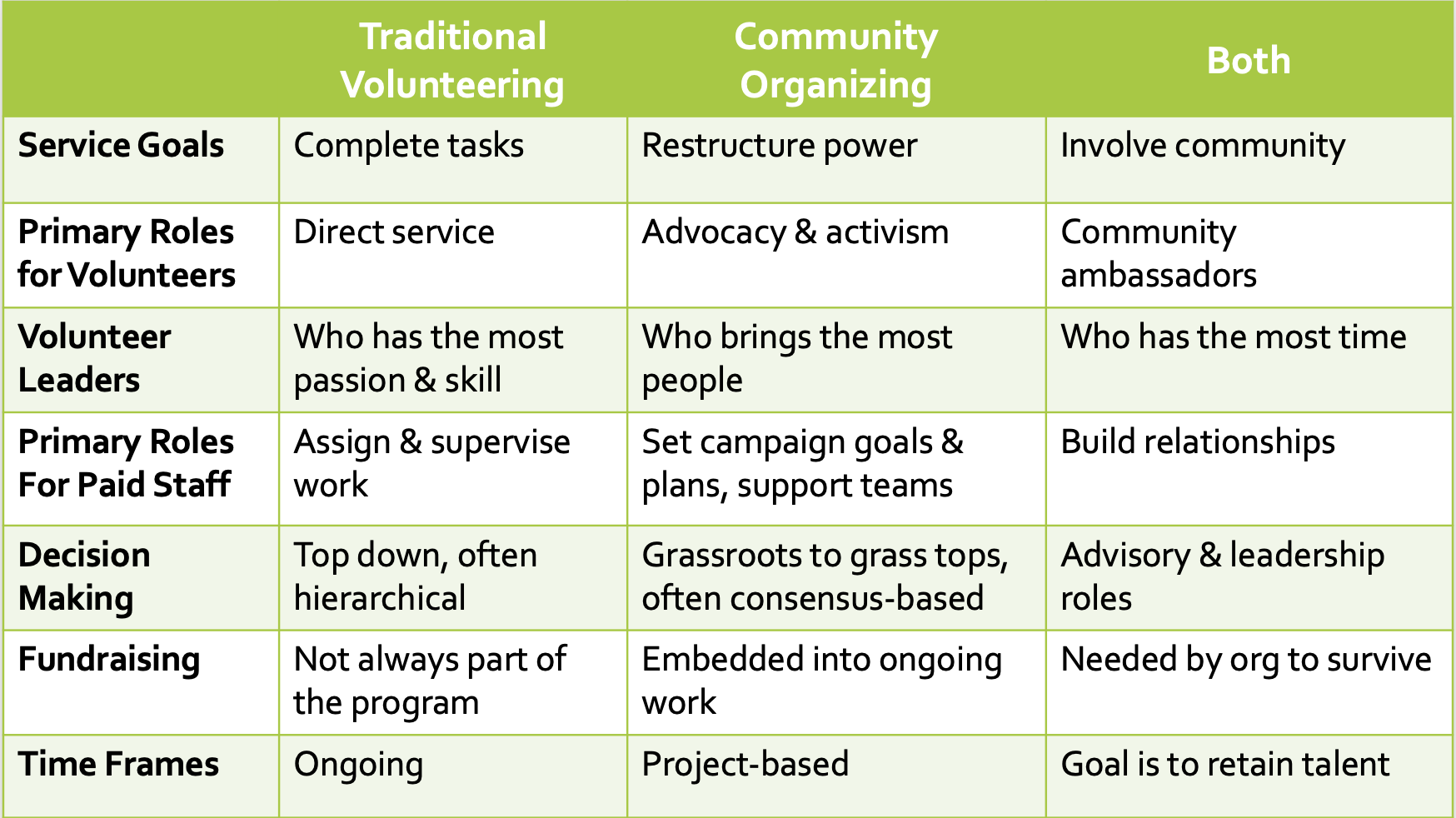 Regardless of the approach, both volunteerism and community organizing can get traction when mobilizing communities.

In today’s complex world, it’s not an either/or choice. In fact, communities must be mobilized in change activities up and down the continuum and, by working together, coalitions can simply be more effective.

Where there is energy, there is hope.

And, community members are the fuel to convert hope into change for the better.

What Changes Do You Hope for Our Sector?